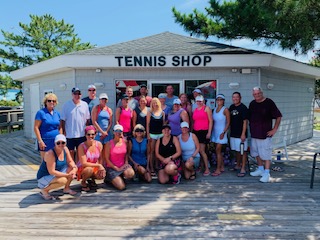 Most tournament matches played at the OC Tennis Center consist of 2 sets with a tie-breaker – if needed – for the third set.  Register for USTA tournaments online at www.usta.com. To sign up for the Delmarva High School Grand Prix Series and Century Tournament you need to contact the Tennis Pro Shop.

Players must have played on a high school team on Delmarva in 2019 or 2020. There are three tournaments leading to a Grand Prix Finals. Your seeding, placement and participation in the Finals will be based on the points accrued from your individual match results in the summer-long event. The Gold Division will be composed of a player that played 1-3 on the Team. The Silver Division are composed of a player that played position 4 and below.

Teams with the combined age of 100 + years. Your team can enter a Women’s Doubles, Men’s Doubles or Mixed Doubles Tournament. Tournament followed by a cook-out. Must sign up as a team.

WHO: Men or Women 21 years and over

Tennis on Campus is the USTA’s program for college club tennis players. It has been designed for & organized by college students who want to stay involved in the game, make friends & compete in events all around the country. OC Tennis is proud to be a host site for this wonderful tournament series.