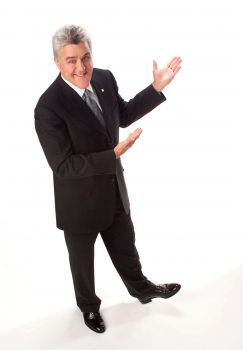 Jay Leno’s late night television ratings domination included two decades as the host of the #1-rated “The Tonight Show with Jay Leno” – he never lost a ratings year in which he served as host.

Leno, currently produces and is host of the CNBC Television series “JAY LENO’S GARAGE” now in its fifth season. “Jay Leno’s Garage” explores the world of cars, never forgetting that it’s the people behind the wheel who provide the real stories. The series debuted in October 2015 and delivered CNBC’s most-watched first season in network history.

Leno is the recipient of many honors, including Emmy, People’s Choice, and TV Guide awards, Harris Poll selection as most popular star on television, the Hasty Pudding Award at Harvard University, The Mark Twain Prize, recipient of the Patriot Award given by the Congressional Medal of Honor Society, a star on Hollywood’s Walk of Fame, and being the first person to drive the pace car of all major NASCAR events.

Don’t miss your chance to spend an evening with Jay Leno, Thursday, May 14th at the Ocean City Performing Arts Center. Show times are 7pm and 9:30pm. For tickets visit the OC Box Office, call Ticketmaster 1-800-551-SEAT or online at DelmarvaConcerts.com.

Ocean City, Maryland to Mark the Official Start of the Beach Season with Memorial Day Weekend Ceremony
May 23, 2022

Give a Lasting Gift to your Loved Ones; Beautification Committee offering special rate for “Reflections of Life” display
May 17, 2022