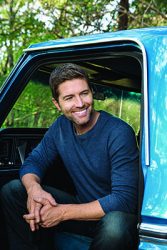 Multi-platinum MCA Nashville recording artist Josh Turner is coming to the Ocean City Maryland Convention Center Friday March 23, 2018.  Turner has sold more than 8 million units, is a disciple of traditional country music and one of the youngest members of the esteemed Grand Ole Opry.  From his 2003 platinum-selling debut Long Black Train to his most recent 2017 Billboard No. 1 release, Deep South, Turner has garnered multiple GRAMMY, CMA, and ACM nominations. Turner’s hits include “Your Man,” “Why Don’t We Just Dance,” “Firecracker,” “Would You Go with Me,” “All Over Me,” “Time Is Love,” and his most recent “Hometown Girl.”

Tickets for the Ocean City Josh Turner Concert, Friday March 23, 2018, will go on sale Friday, December 1, 2017 at 10am and can be purchased by visiting the OC Box Office, calling Ticketmaster 1-800-551-SEAT or online at www.oceancityconcerts.com.  For additional information visit oceancityconcerts.com.  To be the first to know about concerts coming to Ocean City Maryland make sure to like Ocean City Concerts on facebook!

Town of Ocean City Working Closely with Business Community to Offer Safe Outdoor Seating After Governor Announces Completion of Stage One Recovery
May 28, 2020