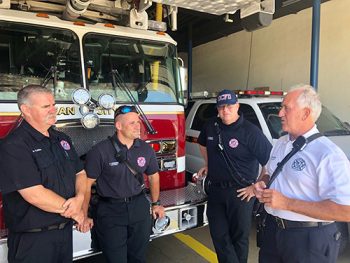 Ocean City, Maryland – (June 24, 2019):  After being officially sworn-in on June 11, Ocean City’s new fire chief, Richard Bowers, reported for his first day of duty today.  Chief Bowers, who is no stranger to the fire, rescue and emergency medical service, joins Ocean City after more than 40 years of experience in every rank.

“Being only the second career Fire Chief of the combined department is not only a great honor but also a great responsibility,” commented Chief Bowers.  “I look forward to engaging this community, building relationships with our residents and visitors and continuing to make the Ocean City Fire Department the very best that it can be.”

Along with multiple certifications, Chief Bowers holds a Bachelor of Science Degree in Fire Service Management, as well as a Master’s Degree in Human Resources and a Fire Protection Certificate.  Along with his role as fire chief, Chief Bowers is a proud husband to Deborah for 41 years and proud father to daughters Ashley and Natalie.

“Chief Bowers brings four decades of community service and public safety leadership to Ocean City,” commented City Manager Doug Miller.  “Along with his strong drive and diverse management experience, it is his positive energy and enthusiastic attitude to the fire service that makes him a great fit for Ocean City.”

Ocean City Mayor Rick Meehan: “Ocean City is Our Happy Place, But Right Now There Is No Place Like Home”
April 3, 2020