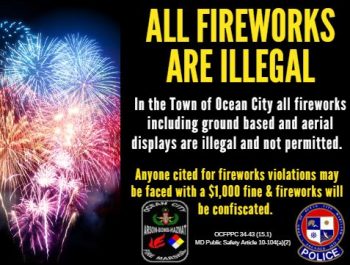 Ocean City, Maryland – (June 25, 2019): The Ocean City Fire Marshal’s Office is teaming up with the Ocean City Police Department and Beach Patrol this Fourth of July to prevent the possession and use of illegal fireworks in the resort community. Special patrol teams will be on the beach and in various neighborhoods throughout Ocean City to enforce this important ordinance.

According to the National Fire Protection Association (NFPA), Fireworks start an average of 18,500 fires per year, including 1,300 structure fires, 300 vehicle fires, and 16,900 outside and other fires. These fires alone caused an average of three deaths, 40 civilian injuries, and an average of $43 million in direct property damage.

“The power and danger of fireworks should not be underestimated,” said Ocean City Fire Marshal David Hartley. “In addition to causing damage, fireworks can cause injuries and we want people to be safe during their holiday stay in Ocean City. The safety and wellbeing of all residents and visitors of the Town of Ocean City is the primary goal of the Ocean City Fire Department.”

Although the State of Maryland has approved the use of ground-based sparkling devices such as cylindrical and cone fountains, these are not legal to use or possess in Ocean City. Further, all other fireworks that may be sold in neighboring states are not legal for use by the public anywhere in Maryland.

Products such as handheld Gold labeled sparklers, “Snap-N-Pops”, “Black Cobra Snakes”, and “Party Poppers” are allowed to be used and possessed without a license. However, injuries and property damage may still occur from these types of products, so parental supervision is always encouraged.

“Along with the risk of injury and property damage, the noise of fireworks can scare pets and can be disturbing to veterans and those suffering from prost-traumatic stress syndrome,” Hartley continued. “Ocean City offers two great July 4th fireworks shows with free music and fireworks in two locations: downtown on the beach at North Division Street, and uptown at Northside Park. For your safety, and the safety of others, leave the fireworks up to the professionals.”

Anyone with questions pertaining to fireworks should contact the Ocean City Fire Department, Office of the Fire Marshal at 410-289-8780.