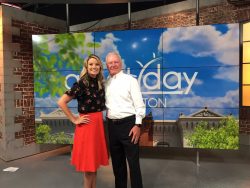 Mayor Meehan visited three of D.C.’s top media outlets, including WTTG-TV FOX 5, WUSA-TV CBS 9 and WRC-TV NBC 4, to talk about Ocean City’s free concerts and fireworks shows on the Fourth of July, as well as big events coming up soon and other key things visitors should know when vacationing or planning a vacation in Ocean City this year.

“Our trip to Washington, D.C., couldn’t have come at a better time to promote the Fourth of July fun we have planned in Ocean City, as well as all of the other events coming up the rest of the summer,” said Mayor Meehan. “There are so many new things going on in Ocean City this year, including the brand-new Woodward WreckTangle, where we are looking to crown the fastest ninja in OCMD. And there’s plenty of time left to come and visit us this summer!” 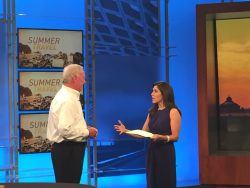 Mayor Meehan also promoted Ocean City’s inclusion on TripAdvisor’s recent list of the “25 Best Family Beach Vacations to Take with Kids in the USA,” as well as upcoming events, including the Ocean City Tuna Tournament from July 12-14, the White Marlin Open from Aug. 5-9, ART X from Aug. 24-25, and the free family events and activities the town offers throughout the summer. Mayor Meehan let viewers know it’s easier than ever to get around Ocean City, as visitors are able to track the Beach Bus using the TransLoc Rider App and pay for parking throughout downtown OCMD using ParkMobile.

All media tours are organized by the town’s agency, MGH, and coordinated by Donna Abbott, Tourism Director for the Town of Ocean City.