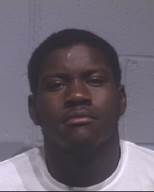 OCEAN CITY, MD – (June 16, 2020): On June 9, 2020, at 4:06 a.m. Ocean City police officers responded to an assault and robbery which occurred near 7th Street and Philadelphia Ave. The victim, a 21-year-old male, told police that he had just been robbed and assaulted.

Ocean City police officers and detectives completed an extensive investigation and were able to identify the suspect as Isaiah Foster, 20, of Cambridge, MD. An arrest warrant was issued for Foster.

On June 14, 2020, officers were monitoring a disorderly group near 9th Street and the boardwalk. While watching the group, an officer observed Foster in the area. As several officer’s approached Foster, he attempted to run, however, he was quickly taken into custody without incident.

Foster has been charged with robbery, theft of $100 to $1500, and second-degree assault. Foster was seen by a Maryland District Court Commissioner and transferred to the Worcester County Jail where he is being held without bond.