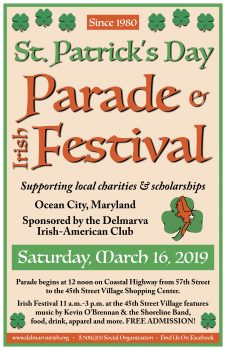 Ocean City, Maryland – (February 28, 2019): Ocean City will be glistening in green as the annual St. Patrick’s Day Parade and Festival, sponsored by the Delmarva Irish-American Club, marches down Coastal Highway on Saturday, March 16. This Ocean City tradition, which began in 1980, has grown to become the second-largest St. Patrick’s Day Parade in the state, in addition to becoming a seasonal kick-off for many local businesses.

Leading the parade are Grand Marshals Fran and Michael Patrick Kelly, along with Lillian Farrell, Cultural Affairs Attaché from the Embassy of Ireland. Featuring the Chesapeake Caledonian Pipe Band and the Ocean City Pipe and Drum Band, the St. Patrick’s Parade brings the sounds of Ireland to the streets of Ocean City. Also participating are local high school marching bands plus numerous festively decorated floats sponsored by local businesses, groups and organizations.

In addition to the celebration on the street, the 45th Street Shopping Center will be once again be transformed into a spirited Irish festival complete with live entertainment from Kevin O’Brennan and the Shoreline Band, Irish apparel and plenty of food and drink. Spectators can enjoy the free-admission festival beginning at 11 a.m. and running until 3 p.m.

To avoid traffic delays, viewers are urged to arrive before 10:30 a.m. and to view the parade from 57th Street south to 45th Street.

For the fourth year in a row, WRDE will broadcast the parade live beginning at 11:30 a.m., with hosts Matt Pencek, Madeleine Overturf and Dean Langrall. The WRDE Irish Eye in the Sky will bring brilliant pictures of the parade from above along with cameras covering all the floats, bands and maybe a leprechaun or two. Watch a re-broadcast of the parade Sunday, March 17, on My Cozi TV. WRDE is Delmarva’s NBC station on Comcast and Mediacom 9/809, Dish Network and Direct TV 31 and over the air on 31.1. Find My Cozi TV on Comcast 204, Mediacom 99 and over the air at 31.2.

The DIAC was founded in 1980, and its first membership drive resulted in 75 members. Today, there are close to 300 members. Over the years, the club — a 501(c)(3) social organization — has donated more than $500,000 from the proceeds of the annual parade and festival. These donations go to scholarships for local high school students and to other local charities and organizations.

For more information, visit www.delmarvairish.org or contact Buck Mann at 410-289-6156. 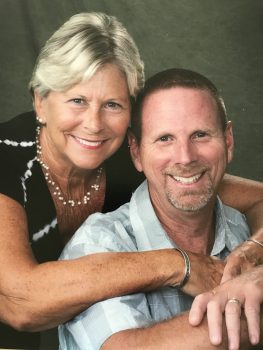 Frances and Michael Patrick Kelly have owned property in Ocean City since 1994. After spending many summer vacations with their families in Ocean City while growing up, it became clear to them that they would one day make it their permanent home. They made that dream a reality when they officially became residents of Ocean City in 2003. Fran and Michael have been living in the Caine Woods neighborhood since and have never regretted their decision.

Fran is the daughter of Angela (nee Connelly) and Daniel Schaech. She is one of eight children and grew up in Woodlawn, Md. Fran joined the workforce after graduating high school and began working for C&P Telephone Company. During her career the phone company underwent several name changes. She retired after almost 29 years of service from the company now known as Verizon. Once retired, she took on a role of caregiver for her aging parents until their passing. Fran is a member of the Delmarva Irish-American Club, where she heads the Membership Committee. In addition, she is an appointed member of the Ethics Commission for the Town of Ocean City. Fran is also an active member of St. Luke Catholic Church where she enjoys volunteering and community fellowship. She is very passionate about raising money to find a cure to end Alzheimer’s.

Michael Patrick Kelly is a product of the Kellys and the Murphys, and is a true, 100-percent Irishman. He is a graduate of Mt. St. Joseph High School in Baltimore, Md. Not much for the classroom, he started his career in the construction field more than 38 years ago. In 2003, Michael started his own company, OC Local Construction Services, and loves working with property owners in Ocean City. He is a member of the Delmarva Irish-American Club and an active member of St. Luke Catholic Church. Michael enjoys spending time with his parents Francis and Dolores Kelly, 89 years old, who still live in the family home where he grew up as a child in Woodlawn, Md.

Fran and Michael love to travel. However, they don’t have to go far to sit on a beautiful beach; they have one right in their own back yard. They enjoy watching the Orioles and Maryland Terps, and are Ravens season ticket holders.

Family is a huge part of their lives. Their daughter Danielle lives in Lutherville, Md. Kimberly her husband Mike and their two daughters live in Perry Hall, Md. Tara lives in Nottingham, Md. Their grandchildren Madisyn and Morgan spend at least four weeks every summer in Ocean City with them. Every day is an adventure, and they love it.

“We love the St Patrick’s Day Parade. It has been a family tradition for many years. We march together and carry the American and Irish flags proudly. We are humbled and honored to be the 2019 grand marshals” Fran said.