The Town of Ocean City Awards $5,000 For First White Marlin Catch of the 2022 Season 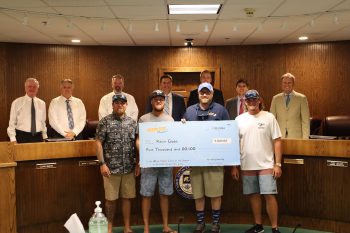 Ocean City, MD – (7/20/2022): Ocean City is the White Marlin Capital of the World, and anglers across the area celebrate every year when the first white marlin is caught. This year, that honor belongs to Kevin Gibbs, who reeled in the first white marlin of the 2022 season on Tuesday, June 7, at approximately 9:06 a.m. Gibbs caught the marlin aboard the “Wrecker” vessel, led by Captain Jeremy Blunt. The marlin was released shortly after being caught.

At Monday’s Mayor and City Council meeting, officials awarded Gibbs with a $5,000 check in celebration of the catch. “Ocean City is proud to be the White Marlin Capital of the World,” commented Mayor Rick Meehan. “The first white marlin catch of the season is a symbolic start to the fishing season and hopefully a sign of many more for our offshore fishermen this summer.”