Please see the below news release on behalf of Special Events/Team Productions:

We Will Rock You

The Musical by QUEEN and Ben Elton 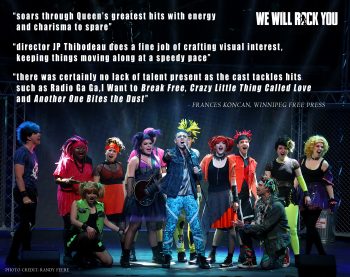 The hit Broadway show WE WILL ROCK YOU The Musical by QUEEN and Ben Elton is coming to the Ocean City Maryland Performing Arts Center for one night only, Friday, November 8, 2019!

Since 2002 over 15 million theatregoers in 17 countries have been thrilled by this awe-inspiring production, which is based on the songs of Queen with a book by Ben Elton. Elton fashioned this hilarious futurist comedy around more than 24 of Queen’s biggest hits including We Are The Champions, Radio Ga Ga, I Want To Break Free, Somebody To Love, Killer Queen, Don’t Stop Me Now, Under Pressure, Bohemian Rhapsody, Another One Bites The Dust and of course, We Will Rock You.

“The audience gets to become part of what eventually becomes a rock concert…” Ben Elton.

WE WILL ROCK YOU reflects the scale and spectacle that marked Queen’s live performances and earned the band its pinnacle position in rock history. With Queen’s Brian May and Roger Taylor as music supervisors and “a band without parallel in the theatre” behind the cast, the audience can expect WE WILL ROCK YOU to rock as the best of Queen’s concerts!