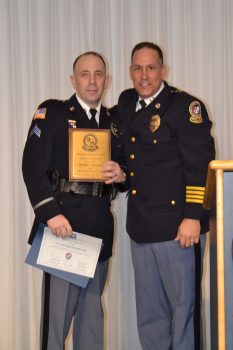 OCEAN CITY, MD – (January 31, 2018): On Friday, January 26, 2018, the Neighborhood Watch Associations of Ocean City gathered together with Ocean City Police Department (OCPD) employees at the Grand Hotel for their annual Officer of the Year Ceremony. Over 150 guests gathered together to recognize OCPD personnel and volunteers for their accomplishments in 2017.

Cpl. Richardson joined the OCPD as a seasonal officer in 1997 and continued to work each summer until being hired as a full-time officer in 2000. He has served on the K-9 Unit, Narcotics Unit and Patrol Division. His superiors praise Cpl. Richardson’s dedication to street level drug enforcement. Upon accepting the award, Cpl. Richardson credited his award to his fellow officers and thanked his family for their support.

Volunteers of the OCPD Auxiliary Unit were also recognized for their contribution of 2,390 hours of their time in 2017. Since the Unit’s inception, Auxiliary Officers have volunteered a total of 60,391 hours which translates to a cost saving of over $2 million to the taxpayers of Ocean City. This year, the Auxiliary Officer of the Year Award was given to Kathy Grimes for her dedication to public safety in Ocean City. Grimes joined the Auxiliary Unit in 2016 and volunteered over 560 hours in 2017.

As part of Friday’s ceremony, many officers were awarded departmental commendations for exemplary service. The following officers were recognized:

In addition, Chief Buzzuro took time to thank Susan Jones, the Executive Director of the Ocean City Hotel-Motel-Restaurant Association for her assistance during several major motor events in 2017. Jones was able to secure discounted hotel rooms and meals for visiting law enforcement officers who assisted the OCPD during the motor events.