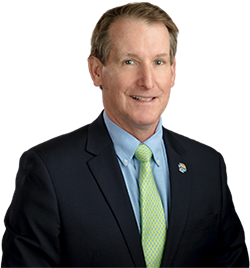 Doug Miller is a Marylander who spent his elementary school years in Howard County and his high school years in Anne Arundel County. He received his Bachelor’s Degree at Roanoke College in Salem Virginia then went onto the University of Baltimore where he earned a Master’s Degree in Public Administration.

As a local government professional, Doug has been Town Manager in Snow Hill, La Plata and Aberdeen. He is very active with the Maryland Municipal League and has served on multiple committees there including the Legislative Committee, Convention Planning Committee and co-chair of the annual golf tournament. He is also a Credentialed Manager with the International City and County Management Association.

Doug is married to his wife Anne who is a certified personal trainer. Doug and Anne enjoy the Eastern Shore and the outdoors.

The City Manager is the Chief Administrative Officer of the Town. He is responsible for the daily operations of the town and supervises all Departments and Divisions. The City Manager makes reports and recommendations to the City Council concerning any municipal matter, which may deserve council attention. He carries out the policies and duties as assigned by the City Council and serves at their pleasure. The City Manager prepares an annual budget and presents it to the council for approval and adoption. He attends all legislative committee meetings, Pension Trustee meetings and also serves on the management negotiations team for union contracts.