Bruzz is a Salisbury, MD native, who was introduced to the sport of tennis when his hometown hosted the U.S. National Indoors in the Sixties and Seventies.  Players who participated in the event included Rod Laver, Arthur Ashe, Stan Smith, Jimmy Connors, Ille Nastase, etc.  Salisbury was known as Tennis Town USA each February during those years. As a result, Bruzz became a tennis player in high school…playing for James M. Bennett High School, and continued his career collegiately for four years at his alma mater – Western Maryland College. Bruzz is the coach for the 2017 Bayside Champion James M. Bennett High Schools boys’ team. 2018 will be Bruzz’s fourth season as a member of the staff at the Ocean City Tennis Center, where he has conducted tennis programs, junior clinics as well as individual lessons.  He also serves as the tournament director for the boys and girls high school tennis tournaments held annually at the OC Tennis Center. Still an avid player, Bruzz continues to compete in the Mid-Atlantic Region’s tennis tournaments. 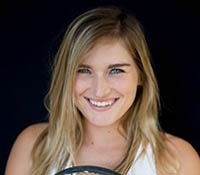