A Bit of History

Prior to 1992 Ocean City operated over 700 radios on fourteen different radio systems on three different radio bands. This was the pinnacle. Years of separate city departments working individually and growing from the small seasonal town that existed in the 1970s to the second largest city in Maryland during the summer months.

It became clear in 1985 during the evacuation of Ocean City from the threat of Hurricane Gloria a communications problem existed. The Beach Patrol couldn’t talk to the Police, the Fire Company couldn’t talk to Beach Patrol. In short departments and agencies did not have the ability using radios to coordinate activities.

In December of 1992, Ocean City purchased an 800 MHz analog EDACS trunked radio system. The system was installed between 1992 and 1994. The public works departments were first loaded on the system to ensure all problems were cleared prior to loading the public safety and emergency service agencies.

Ocean City received notice that EDACS support would end on December 31, 2017 and after research, decided to purchase a P25 Phase Two radio system.  The system was installed in 2018 and 2019.

Click below to read an article submitted by Bob Dimaio 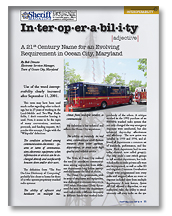