Hosted by the Ocean City and Ocean Pines Chambers of Commerce 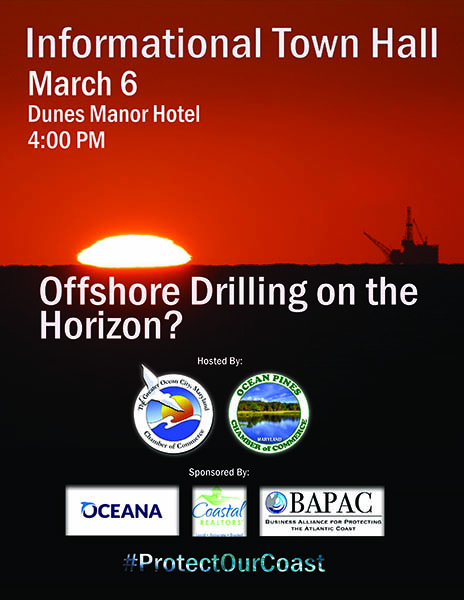 The Ocean City and Ocean Pines Chambers of Commerce host the an informational town hall focused on how Maryland’s business community can comment on the new federal offshore drilling plans that will impact the regions’ tourism-based economy.

WHERE: Dunes Manor Hotel, 2800 Baltimore Ave, Ocean City, MD 2184 Note: Parking is located at the front of the building. Event organizers will have signage directing guests where to park and enter. The room will be an “ocean front” room.

As the Trump administration continues to move forward with plans to open areas off the Delmarva Coast to oil and gas development, the Greater Ocean City and Ocean Pines Chambers of Commerce are working together to host an informational meeting about the prospect of drilling off our coast and how citizens and members of the business community can weigh in.

“We have a robust tourism economy. Our greatest economic driver in this region is our clean beaches. We need to make sure they stay that way,” said Melanie Pursel of the Greater Ocean City Chamber of Commerce.

A public comment period for the offshore drilling plan is anticipated to open in the coming weeks and both the Greater Ocean City and Ocean Pines Chambers want to make sure residents are informed and ready to engage.

“People need to know what’s being proposed off our coast and how they can bring their voice to the table. That’s what this event is all about.” said Kerrie Bunting of the Ocean Pines Chamber.  The group issued a press release expressing opposition to seismic surveys for oil and gas off the Delmarva Coast earlier this year.

●Worcester County Commissioners: Voted to send letter expressing opposition to seismic testing and drilling for oil and gas in the Mid-Atlantic 2/19/19